History of the Miniature Schnauzer 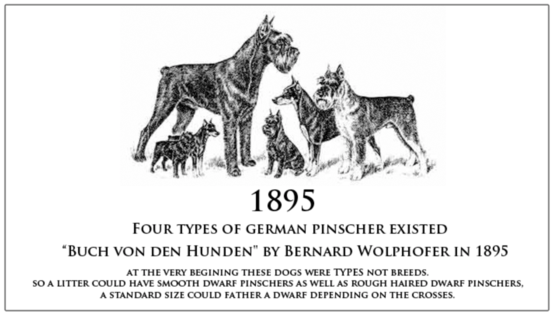 In the beginning they were called dwarf pinchers and came in smooth and rough haired types.

This is where smaller sized DNA, Parti markings and many colors such as livers and Red/Wheatens were introduced into the schnauzers because poodles,Pinchers and the other breeds carried for all of these even back in the 1800's.

The Miniature Schnauzer was exhibited as a distinct breed as early as 1899. Today's Miniature Schnauzer in the United States is an elegant dog of the Terrier Group. While the breed resembles other dogs in this group, almost all of which were bred in the British Isles to "go to ground" to attack vermin of all kinds, his origin and blood are entirely different, giving the Miniature Schnauzer a naturally happy temperament.

The breed is hardy, healthy, intelligent, and fond of children. It was developed as a small farm dog, used as a ratter. It's size has permitted it to adapt easily to small city quarters. Miniature Schnauzers have been bred in the United States since 1925 and have gained steadily in popular favor.

These guys are stocky, robust little dogs standing 7 to 15 inches at the shoulder, Miniature Schnauzers were bred down from their larger cousins, Standard Schnauzers. Aside from the size difference, the two breeds look much alike. The bushy beard and eyebrows give Minis a charming, human-like expression they’re rugged, muscular & fearless, but not aggressive.

Where Do the Smaller Sizes & Different Colors Come From?

Shown above, this is where the Parti markings and many colors such as livers and Red/ Wheatens, Black & Tans, Brindle, Bran & Sables were introduced into the Schnauzers as poodles and the other breeds introduced carried for all of these and more even back in the 1800's.

There is even something called speckling shown in the above photo in the chart that goes back to the 1800's. This chart shows the history of schnauzer colors and how they bred away from all the other colors calling them faults.

I have also added some old photos shown below of Dwarf Pinchers known as the beginnings of the making of Schnauzers throughout history. Also of some other schnauzers that can be questioned on their coat pattern. There were indeed Merle Dwarf Pinchers/Schnauzers all the way back in the 1800's. They did not look like your modern day schnauzers look now but this is how they were started.

This is also where the smaller DNA came from in schnauzers. The smaller puppies are NOT smaller because they are unhealthy runts. They are smaller because of the smaller DNA gene that was introduced by the poodle into the Standard Schnauzers to make the Miniature Schnauzer. If you research ANY breed of dog down to its original origin, you will find that every breed (in its beginning) was crossed with another breed to create the “purebred” breed it currently is.

Toy/Teacup Schnauzers Are Still Registered Through AKC as Miniature Schnauzers

Toy and Teacup size Miniature Schnauzers should weigh between 2 – 11 pounds and stand 6-11 inches tall from shoulders to the floor. Evidently, they can not be “show dogs.” However, they can still enter other competitions such as agility, flyball and so on. Also, they can still have “champion bloodlines” in their pedigree if any of their past relatives met the requirements and completed the show competition with a championship title.